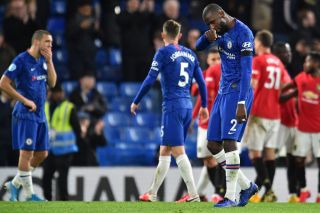 Former Manchester United midfielder Luke Chadwick shares the view that the addition of a new central defender is a glaring priority in the transfer window.

United’s woeful defensive showing in the humiliating 6-1 home defeat to Jose Mourinho’s Tottenham cannot be dismissed as an aberration.

Individual errors were indefensible and performance levels were pathetic in a clash that held such importance going into the international break.

Chadwick has suggested Chelsea defender Antonio Rudiger as a possible wildcard option to bring in on deadline day with the club desperately short in central defence.

“It’s obvious for all of us to see that a centre-back needs to be a priority,” Chadwick told CaughtOffside.

“Anyone to add some competition, all the combinations at the moment don’t seem to be working.

“Someone like Antonio Rudiger, anyone who might be able to come in on loan and help out there, just to shore things up because it does look a bit messy in the back four at the moment.”

Of course, it is unlikely Chelsea would allow Rudiger to go to a direct rival in United and there has been no suggestion of interest from the Reds.

But United simply cannot progress with their current crop of centre-backs that Ole Gunnar Solskjaer continues to persist with.

Harry Maguire has been awful since the start of the season, and new partner Eric Bailly could not do any better than the much-maligned Victor Lindelof in the Swedish international’s absence against Spurs.

United’s defenders must take responsibility for their own abject performances, but the back four is not just where the problems lie.

“As with the Crystal Palace game, the Brighton game, United gave them too much space to play,” Chadwick added.

“The back four have received criticism, but it’s all over the pitch where there are problems.

“It seems so easy to play around United and get into those spaces between full-back and centre half, which Spurs excelled at yesterday.

“There’s a glaring amount of time on the ball for opposition – Brighton and Palace didn’t score all their chances but those games could quite easily have been four, five or six as well, but it certainly came to a head yesterday with Spurs taking a lot of their chances.

“Thank God there wasn’t a crowd at Old Trafford because there would’ve been an awful reaction.”