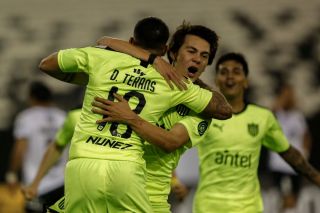 Manchester United have had one of the busiest deadline days in history as they announce their fifth signing of the day after landing the highly-rated Facundo Pellistri from CA Penarol on a five-year deal with an added optional year.

Pellistri, 18, has been announced as the Reds’ latest signing after joining from Uruguay side CA Penarol who are currently being managed by ex-United striker Diego Forlan.

An earlier report from the Telegraph  suggested that the highly-rated youngster is set to become a United first-team player as opposed to joining-up with the club’s youth academy.

The exciting talent is a highly-rated right-sided winger who has featured in 37 matches in all competitions in Uruguay’s top-flight and has been directly involved in six goals.

The Reds have finally officially announced the signing of the talented teenager after he snapped earlier tonight undergoing his medical as per ManUtd.com.

Speaking exclusive to the club prior to his official unveiling, the youngster said: “To join a club with the history of Manchester United is a dream come true. I have learnt a lot at Penarol and I would like to thank them for everything they have done for me. To have the confidence of the manager is an amazing feeling and I know that working with him will be perfect for my development.

“I am coming into a squad full of great players who I will learn from every day. Everyone knows that Manchester United is a club that gives young players an opportunity and I am ready to work hard every day to earn those chances and prove myself in England.”

United have been by far the busiest club on this deadline day with Pellistri becoming the club’s fifth signing in 24 hours.

The United faithful can definitely feel excited by the balance of experience and youth brought in, even if it has been late in the day.