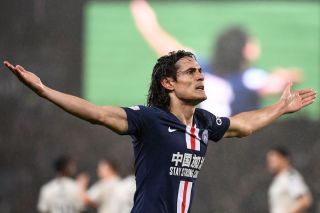 Manchester United have announced the signing of elite striker Edinson Cavani on a free deal with the Uruguayan agreeing to a one-year deal with the option to extend a further year.

Cavani, 33, has joined Ole Gunnar Solskjaer’s United on a two-year deal with the Reds getting the experienced marksman for free due to his last contract with Paris-Saint Germain expiring earlier this summer.

The elite South American has enjoyed a hugely successful career after spells with Napoli and Paris-Saint Germain have seen the striker lift 23 major trophies including six Ligue 1 titles and one Coppa Italia trophy.

Cavani has featured in a whopping 556 domestic competitive matches in all competitions for Palmero, Napoli and Paris-Saint Germain since making his senior debut in March 2007 and has been directly involved in 406 goals.

Just 12-months after making his professional debut, the Uruguayan forward made his international debut during a 2-2 draw against Columbia in a game which saw him score after spearheading a devastating counter-attack from his own half.

Since his international debut 12 years ago, Cavani has gone onto score 50 goals for his country with arguably his greatest moment coming in 2011 when he helped Uruguay lift the Copa America trophy.

Cavani becomes United’s fourth signing on the day of the transfer window’s deadline after Alex Telles, Willy Kambwala and Amad Traore were all announced earlier today.

The elite forward has put pen-to-paper in a deal which will see him commit his immediate future to United until at least 2021 with an option to go to 2022 after the club officially announced the superstar’s arrival, as per ManUtd.com.

Speaking exclusively to the club, Cavani said: “Manchester United is one of the greatest clubs in the world, so it is a real honour to be here. I’ve worked really hard during the time off and I feel eager to compete and represent this incredible club.

“I have played in front of some of the most passionate supporters in football during my career and I know that it will be the same in Manchester. I cannot wait to experience the Old Trafford atmosphere, when it is safe for the fans to return.

“I look forward to continuing to write my little story inside the book of football and I know that’s why my focus has to remain the same as always – work, work, work. I have had a conversation with the manager and this has increased my desire to wear this beautiful shirt.”