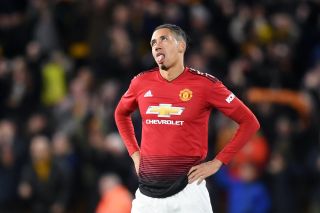 Manchester United centre-back Chris Smalling’s proposed summer move to AS Roma is reportedly close to collapse as the deal is described as heading a ‘negative way’.

Smalling, 30, has been with United for 10 years after signing from Fulham all the way back in 2010 under legendary boss Sir Alex Ferguson.

Over the last decade at Old Trafford, the English defender has featured 323 times in all competitions for the Reds during a spell which has seen him lift five major trophies including two Premier League titles.

However, after spending the duration of last season out on loan with Italian side AS Roma, Smalling’s long-term United future had been cast into doubt.

The experienced centre-back enjoyed a thoroughly impressive campaign in Serie A during the 2019-20 season and after featuring in 37 matches was even able to be directly involved in five goals.

Despite being recalled back to Manchester after his loan spell expired at the end of the last season, the 30-year-old defender has been hotly tipped to rejoin AS Roma this season on a permanent deal.

However, despite a summer of relentless links suggesting Smalling could be on the verge of rejoining AS Roma, the latest in the ongoing saga suggests the Englishman’s proposed move could collapse.

AS Roma are now ‘one step away’ from signing Chris Smalling from Manchester United. Last details pending.

Smalling asked again to #MUFC board to leave the club immediatly and to join AS Roma. 🟡🔴 @SkySport #ManUtd

The latest report comes from Italian journalist Gianluca Di Marzio who spoke live on Sky Sports about Smalling’s proposed move, he said: “A difficult deal also for Smalling to Roma, it’s going a negative way in this moment.”