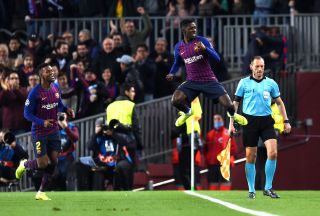 As reported by ESPN journalist Moises Llorens, Dembele arrived at the club’s training facilities on Monday morning but left before training began.

Llorens tweeted: “@Dembouz DID NOT EXERCISE today with the @FCBarcelona_es. He appeared at the Ciutat Esportiva, but before starting training, he left …”

These are the stories that make transfer deadline exciting — but only when it’s a player you know your club has been chasing all summer. That is simply not the case for Dembele, although he may have been on the manager’s list.

Barcelona are said to be negotiating with United over a deal, as per the Manchester Evening News. There’s clearly still a possibility he will join the Red Devils despite reports from RMC Sport claiming Dembele will stay at Barcelona.

He has struggled with injuries since joining Barcelona from Borussia Dortmund and Ole Gunnar Solskjaer would be taking a risk, which probably explains why United are trying to do a loan deal.

Barcelona, on the other hand, sound like they would rather cash in.

Dembele is an underwhelming alternative to Sancho no matter what way you look at it, and I will have my fingers and toes crossed hoping it’s a success should he join.

The lack of planning worries me.