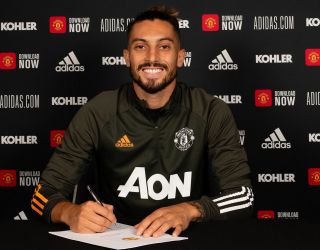 The former FC Porto has given his first interview as a Manchester United player to the club’s official website.

Telles joins after signing as four-year contract, with the option of an extra year.

He was the left-back United were linked to most this summer and it’s a relief to have another deal over the line.

Telles has explained how Ole Gunnar Solskjaer convinced him to move to Old Trafford.

“To join a club with the prestige of Manchester is a huge honour,” Telles said.

“You have to work hard to get to this moment in your career and now I am coming to this club, I can promise that I will give everything in my heart to be a success here.

“I won many trophies at FC Porto and I want to continue that at United. The manager has a clear plan and direction for this team and I can’t wait to pull on the famous shirt.”

On top of that, Telles was asked to describe himself as a player and said: I like to think of myself as a very intelligent player, a set-piece specialist and I’m always looking for opportunities to create passes to score goals.

Solskjaer highlights the traits Telles has which he thinks will help improve his United side.

“First and foremost, I welcome Alex to United,” the manager said (via ManUtd.com). “He is a player we have been tracking for some time and his performances over the past few years are exactly what we are looking for.

“He is a fighter and a winner and will add real determination and competition to the squad.

“Alex has the qualities, both as a player and as a person, that we want here at Manchester United.”