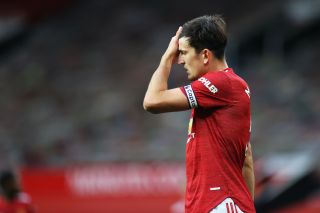 As we approach the second anniversary of Ole Gunnar Solskjaer’s tenure as Manchester United boss, fans are reflecting on 22 months of wildly fluctuating results. The highs of Paris and the strong performances post re-start sit in sharp contrast to Sunday’s utter debacle. Why is this happening with essentially the same group of players who looked like they had turned a corner in July?

At the highest level in the modern game the differentials and margins of error can be very small. Clubs now crawl over data, whether it be performance or metabolic, with teams of professionals across the organisation trying to eek out every last drop of advantage through analysis of every aspect of available intel. It is these small differences that where improved can exponentially push a team towards success.

Manchester United are no different but something is seriously wrong. If everyone is doing their job properly, United should not be losing 6-1 at home to anyone. This team has proved that it can produce great performances but similarly has demonstrated a fragile level of confidence that shatters as the goals start leaking in through a porous defence.

If one or two players are not ‘at it’ then this fragility is exposed. Who knows how applied and disciplined this group are outside of Carrington but the signs are not good. Off the field antics have recently hit the headlines and in this day and age if you are not a dedicated professional, then you are simply not going to excel. It doesn’t matter if you have the best nutritionists and fitness specialists in the world, if one or two key players are not following the plan in their personal life then as a team you will be exposed and exposed badly.

Sir Alex instinctively knew this and sought to clamp down on extra-curricular behaviour and demanded strength of character and humility amongst his players. If a player did not conform to this mantra, then he was out. The manager sets the tone and you wonder whether it’s in Solskjaer’s nature to command respect beyond the odd hairdryer in the dressing room?

It’s the small things that seem to be missing that collectively are proving costly. Indiscipline is giving away penalties and Martial’s red card against Spurs did nothing to hide this weakness. The players should be coached to keep these types of indiscretions to a minimum and a player should have a fear of being dropped to help constrain laxness but players drop clangers and appear game after game. The ease at which Harry Kane was able to pick out Son from a quick free-kick is alarming. It should be second nature for a defender to interfere with the flow of play and smother the quick ball by standing in front of the attacker. Something like that has got to be reinforced and drilled into a defender as a matter of routine until it becomes second nature.

Clearly something is fundamentally wrong with the defence. Is it the personnel or is it the way that they are being coached, or a combination of both?  It looks chaotic, unorganised and completely shorn of confidence. Harry Maguire is has been severely criticised in recent weeks but as club captain appears undroppable. After an awful summer, and none of us really know what went on in Greece, was it really wise to throw him straight back into the team. Would it have been better to give him a few weeks space to sort out his head? Under previous regimes would he even have retained the captaincy and what does it say to the other players the fact that he wasn’t stood down?

In terms of detail what is happening in those defensive clinics? Are the players who are making the mistakes being meticulously walked through the errors on film and provided with solutions to avoid similar mistakes in the future? This is the type of detail that need to be pulled apart if a player or a team is to be successful. Are players going home and watching video after video of their own performance and those of future opponents or are they pre-occupied with other things in small canisters or dating apps?

Sure they are young players and will make mistakes but the question is are they learning from them? It is easy to dismiss such indiscretions without holding people to account, professionals who should be absolutely aware of where the boundaries lie. It is highly worrying to conclude that several do not and you wonder why they do not seem to have a fear of stepping over the mark. Is it really unrealistic to expect a higher level of respect for the club, for the game and not least for themselves?

Being a successful professional as an organisation or an individual means dedication, it means going above and beyond and never accepting failure. This is achieved by an obsessive level of attention to detail, through thorough preparation and developing a strong mental aptitude. Looking at the football club as a whole it is self evident that United are woefully lacking in many of these areas. The way to start to change this is to focus on the basics and to help each other get better. There is a massive challenge ahead with a looming dog fight with even more competitive teams for a top four finish. A journey of a thousand miles starts with one step as they say, time for all concerned at Manchester United to put their best foot forward and soon.