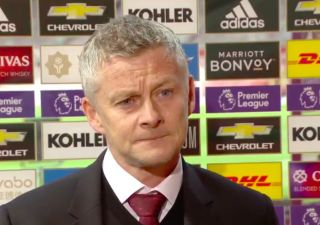 Ole Gunnar Solskjaer lamented Manchester United’s performance as ‘nowhere near good enough’ after his side were humiliated 6-1 by Tottenham Hotspur at Old Trafford.

United completely capitulated on one of the club’s worst days in the modern era.

The Reds were ahead inside one minute after Bruno Fernandes netted an early penalty but the collapse after Tottenham’s instant equaliser was catastrophic.

Solskjaer said he holds his hand up for the shocking performance, stating that it was his decision to pick the team that were humbled by Mourinho’s men.

But in reality, it’s time some of the players took responsibility for what can only be described as spineless defensive efforts.

While Solskjaer is not immune from criticism, the individual performances of most players was deplorable and he simply cannot account for a lack of effort.

Listen to Solskjaer’s immediate post-match reaction below, via Sky Sports:

"I hold my hand up. It's my decision to pick the team I did."

Ole Gunnar Solskjær gives his thoughts after #MUFC concede six in Premier League for only the third time. pic.twitter.com/p9WoQPdJYF

This mess can't all be blamed on a lack of new signings. It's time some of the players took responsibility for pathetic, spineless defending. #mufc

OGS: "I am responsible for this. It hurts. It is embarrassing. I promise I will do everything I can to turn things round."