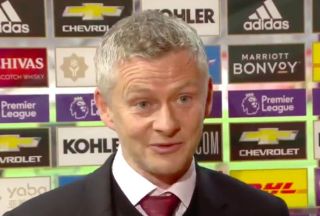 Ole Gunnar Solskjaer was keen to stress that Anthony Martial’s red card could not be used as an excuse for the 6-1 Tottenham defeat, but was unhappy with the reaction of Erik Lamela.

Tottenham were dominating the game with the scoreline at 2-1 when the incident involving Martial and Lamela occurred.

Martial petulantly retaliated to the midfielder raising his hand towards his face and was given a straight red card for a similar action.

Incredibly, Lamela escaped any punishment for initiating Martial’s outburst and the catastrophic collapse began with the Reds down to ten men.

Solskjaer was disappointed with the way Martial reacted but joked that Lamela must need a throat operation after a clear overreaction that resulted in referee Anthony Taylor reaching for red.

The United boss said if Lamela was one of his players,  he would ‘hang him up to dry’ for his involvement in the spat.

Listen to Solskjaer’s reaction below, footage courtesy of Sky Sports:

Ole Gunnar Solskjær was not happy with the Martial red card and Erik Lamela's reaction pic.twitter.com/MBfO1iDo3R