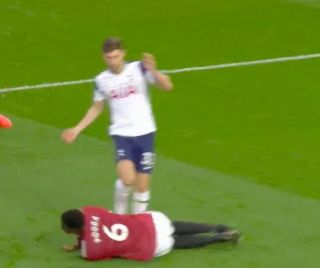 Paul Pogba is often unfairly scapegoated for Manchester United’s awful performances but criticism this evening will be justified.

The Frenchman’s attempted tackle on Ben Davies in the box with United already 5-1 down at Old Trafford was lamentable to say the least.

Pogba was at fault for not tracking his man for the fifth goal when the humiliation was already complete.

And he somehow opted to go to ground in a lazy foul to concede an unnecessary penalty and compound the club’s misery further.