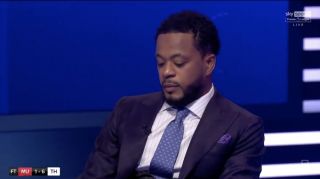 Former Manchester United defender Patrice Evra has launched an absolutely stunning attack on his old club side in response to their crushing 6-1 defeat to Jose Mourinho’s Tottenham Hotspur earlier this afternoon.

The popular Frenchman who is working as a football pundit on Sky Sports was asked for his thoughts on his former side’s performance and unleashed an utterly shocking barrage of comments.

The usually flamboyant ex-defender who today looked totally dejected recalled Alexis Sanchez’s recent comments about wanting his contract terminating after just one day with United and requested that his contract with Sky Sports was also terminated.

Evra’s stunning comments will be echoed by United fans all around the world.

We feel your pain, Patrice.

“I really would like to end my contract with Sky – I know you have to have some filter when you talk on TV.” 😳