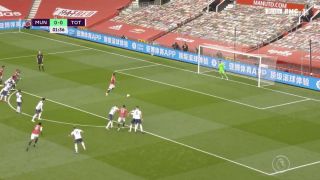 Striker Anthony Martial went down under a poor challenge from centre-back Davinson Sanchez leaving the referee no choice but to blow up and point to the spot.

Despite United’s exciting start, the Reds find themselves 2-1 down after two quick-fire goals from Son and Ndombele sees Spurs take a disappointing lead after just nine minutes on the clock.