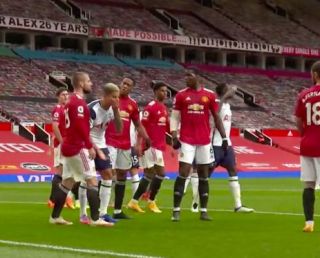 Manchester United have completely capitulated in their Premier League fixture against Tottenham Hotspur at Old Trafford.

The Reds have fallen 3-1 behind with a man sent off after a dramatic opening half an hour in which they took the lead through Bruno Fernandes’ penalty.

At 2-1 down, Anthony Martial was embroiled in an argument with Eric Lamela before a set piece and was sent off by Anthony Taylor for petulant retaliation by raising his hand at the Argentine’s face.

There was little difference between the reactions of the pair but Martial was the man who was forced to leave the field.

Just moments later, Harry Kane compounded United’s misery by making it 3-1 and effectively ending the game as a contest.

READ MORE: (Video) Tottenham score twice to come from behind in first 7 minutes against United