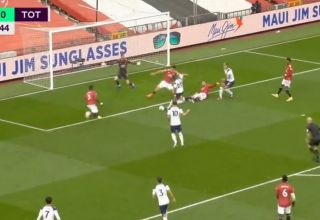 Three goals in the first seven minutes at Old Trafford.

Manchester United were given a penalty just 35 seconds into the first-half as Bruno Fernandes found the back of the net to add fuel to Jose Mourinho’s frustration over his former club winning penalities.

But Spurs have been allowed to burst through United’s defence twice and have turned the game on its head early on.

For both goals, they literally drove through our defenders at ease yet it doesn’t look like we’ll be signing a new centre-back this summer.

It’s so poor to watch.

Harry Maguire had a mare for their first — heading the ball into danger before being teased like a dog who has lost its favourite tennis ball. It was too easy for Ndombele.

Watch the goals below, footage courtesy of RMC Sport:

The second by Son simply shows how light we are at the back.