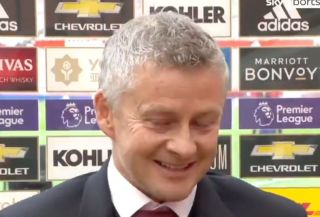 Ole Gunnar Solskjaer giving nothing away on Edinson Cavani reports – but a smile slipped through his tight-lipped exchange with Geoff Shreeves.

According to the Manchester Evening News, Edinson Cavani and Alex Telles both had medicals scheduled on Sunday ahead of their moves to Manchester United.

The news broke just before United’s Premier League clash against Tottenham that the club had reached an agreement with FC Porto over Alex Telles, as per Fabrizio Romano, with Portuguese publication Record claiming a deal will be closed today.

The United manager didn’t give much away, saying: “I can’t say anything before a deal is done.”

"I can't say anything before a deal is done." 🤫

Ole Gunnar Solskjaer responds to the speculation regarding a potential move to #MUFC for Edinson Cavani…🇺🇾 pic.twitter.com/fvtyzg1gSt

Solskjaer will be excited about the prospect of working with Cavani and hopefully he’s a success.