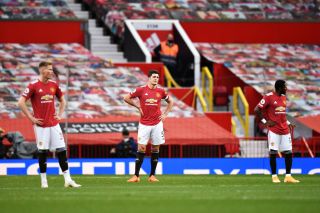 I promise to try my best to be objective here, but this is probably the worst performance I’ve ever seen in my time watching Manchester United.

After an early penalty from Bruno Fernandes to put United ahead, the Reds quickly conceded two goals from ridiculous individual errors courtesy of captain Harry Maguire. Then, Anthony Martial was sent off in what was, frankly, a ridiculous decision, and the match was over.

It’s hard to really point to where such a negative performance came from, even if Crystal Palace and Brighton gave us signs. Underlying fitness issues persist, and the board have clearly failed to deliver depth signings to a threadbare squad, but even then, this was unprecedented.

It’s difficult to pinpoint a single goal for which de Gea can be blamed, but you have to expect better from one of the best goalkeepers in the world of the last decade. I find it hard to believe that the de Gea of 2017 would’ve been nutmegged and chipped in the same game, and I also might argue that United wouldn’t have conceded 6 with Dean Henderson in goal. I think it might be time to move on.

I feel bad for Wan-Bissaka. After watching Lucas Ocampos and Sergio Reguilon double team him for Sevilla in the Europa League semi-final, I thought Solskjaer would opt for Donny Van de Beek over Mason Greenwood to protect him against Heung-Min Son and the same fullback.

Reguilon’s impact on the match was relatively muted, which is fair enough, but Wan-Bissaka didn’t really have the opportunity to offer more than he did in the match defensively, and going forward, he once again didn’t offer enough.

Bailly earned his inclusion today by default after Victor Lindelof’s recent showings, but he wasn’t any better. Bailly is a more talented defender than Lindelof, and more tactically suited to playing alongside Maguire, but on the ball, he makes some highly questionable decisions as shown by the pass that led to Spurs’ third goal, and he loses composure much quicker than Lindelof as well, flying into situations that he doesn’t need to jump into.

I like Maguire. But everything went wrong today. He missed two headers, which never happens, before pulling Shaw over and allowing Tanguy Ndombele to score Spurs’ opener. Then, he made individual errors for the second goal, and was left helpless for the remainder. His passing was completely off, he frequently stepped out of defence for no reason to the point where he was occasionally further forward than the likes of Paul Pogba and Bruno Fernandes. He was the sole reason for United being down 2-1 after a proactive start.

Maguire was one of the greatest contributors to United having one of the best defences in England last season, a season whose relative success was defined by relative stability at the back. Despite constantly facing ridiculous criticism, he was largely not at fault for most of the goals United conceded either. I don’t know whether his head has been impacted by his unfortunate summer, but he needs to not play next week, and really show his mentality after that.

Shaw was left in the dust by Spurs’ right flank of Serge Aurier and Erik Lamela. After two largely positive campaigns from the Englishman, this feels like a huge step down. He always seems to be a step behind fitness-wise, and there were murmurs of this issue before his infamous leg break in 2015. Alex Telles isn’t an accomplished fullback at this level, but with reports of United signing him before the transfer deadline, Shaw needs to step up.

Matic has three main jobs on the pitch- game management, progressive passing, and defensive cover. So when you see that United are being out-possessed, conceding multiple goals per game, never playing through the right side of the pitch, and turning over the ball in bad areas, it’s not a good sign for the two-time Premier League winner, who was hooked at half-time in an attempt to save face.

When you see that he doesn’t have the legs to mark the likes of Pierre-Emile Hojbjerg on the counter, he doesn’t offer cover for Maguire defensively, he doesn’t offer passing options for Paul Pogba, and he doesn’t offer anything in the final third, you question why he is being trusted to play the most physically, tactically, and mentally important role in the side.

Solskjaer continues to insist he doesn’t need a holding midfielder while the board allowed one of the best possession-based midfielders of this generation to join their biggest rivals for peanuts. If that continues to be the case, at least play Fred instead of Matic.

I thought Pogba was effective, given the circumstances, until Martial’s sending off. Then, he was moved to left-wing and allowed Hojbjerg to look like himself with a slicing pass to Serge Aurier for Spurs’ fifth, and conceded a penalty for the sixth.

Pogba isn’t a holding midfielder, and it always seems to be the same story- his partners are terrible, he isn’t given the ball in good areas, etc. But he’s supposed to be the club’s best player, and you always expect him to have the leadership, impact, and drive that Fernandes seems to bring to the team.

Even though he was United’s best performer alongside Anthony Martial in the restart and Europa League run last season, he still didn’t- and still doesn’t- play with the same joy that he did when he stormed the league in his first season. Whether it’s because of the fans and media, the board, or he himself, it might be time to let him leave and try to rediscover that joy again, especially if United aren’t going to show any ambition.

I’m not really sure why Fernandes, of all players, was hooked at half-time. He was heavily involved in winning the penalty for the side, scoring it as well, and while he missed quite a few passes amidst the chaos, who wouldn’t have?

Greenwood was determined to help United after the sending off, showing for the ball and displaying a level of maturity that you don’t often see from such young players. Nonetheless, I think it’s time to rethink the strategy of starting him in games of this magnitude, especially against difficult attacking left-backs, although with Martial’s suspension, he only becomes more important to the side.

Rashford looked like he could have made an impact on the counter, smacking the post at 2-1 before being ruled out offside. His timing of runs seems to be poor for a player with so much pace, but it didn’t matter today. He also often had to make covering runs for Matic on the counter, which is frankly inexplicable.

The sending off was ridiculous. Sure, it’s his fault for reacting, but even his reaction barely warranted a yellow, if at all. Martial created United’s only goal today with his quick feet, and blaming a striker who was wrongly sent off at 2-1 for a match that ended 6-1 to the opposition would be disgraceful.

I guess this means Edinson Cavani starts up front next week, pending medical…

A match where you have no expectation of entering the opposition half, and you need disturbance, energy, and ball retention, is the perfect game for Scott McTominay. He was the closest thing to ‘refreshing’ in that second half, even if ultimately ineffective. Still can’t play in defensive midfield, though.

The Brazilian misplaced too many passes today, but it’s hard to blame him given the circumstances. Ultimately too risky in possession and defence to be the only defensively-oriented midfield in the side, Fred still has a claim to being United’s best holding midfielder at the moment.

His presence in the side seemed to protect Matic in the big games before lockdown, as the partnership derailed Manchester City and Chelsea, but any side with title ambitions cannot be playing two players as defensive as Matic and Fred in midfield.

He looks like he could be one of the best space-finding attacking midfielders in Europe one day. It could end up being a real shame that he joined this mess if United don’t shape up.