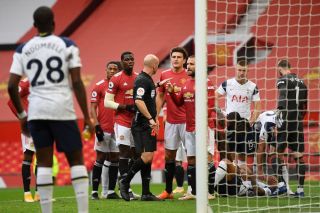 Where to begin with this one. Usually I would be preparing to issue a digital rant about VAR and how it’s technology is continually being wrongly deployed throughout the beautiful game. However, shockingly, whereas I normally wish it didn’t exist, after today’s first-half, I am left wondering where the heck it’s gone… Anybody??

Manchester United number-nine Anthony Martial has seen red at the mid-point during the first-half of United’s important league game against Tottenham Hotspur.

Martial’s dismissal came whilst both sides were waiting for a Spurs corner to be taken. The extremely petulant and highly annoying Erik Lamela appeared to elbow United’s Frenchman in the throat which caused an equally irrational reaction in the form of a slap across the face. Now now ladies.

All would have been resolved had the referee had used some common sense and actually reviewed the altercation, instead Taylor called upon his spidey senses with an echoing Portuguese accent ringing in his head to the tune of something like “I sink United get all zee decisions.”

With no 85,000 strong Old Trafford crowd to force him the question his impending decision, Taylor wasted no time in dismissing Martial and then appearing to suffer some sort of memory loss as he allowed the corner to take place after the Frenchman’s departure down the tunnel.

Lamela who is often referred to as Spurs’ ‘Argentinian wizard’ must have thought he really did have an invisibility cloak on as Taylor strolled on past him without even so much as a warning.

As a side note – Let me make it clear, Manchester United have been dire. Absolutely shocking and probably do not deserve to be winning this game, but what they DO deserve is to playing against an equal number of men, beit, 10 or 11 of them.

Read more: (Video) Kane and Son strike to make it 4-1 at Old Trafford