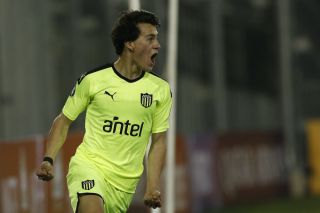 Manchester United are reportedly ‘on the verge’ of signing highly-rated Facundo Pellistri from club side CA Penarol who were previously managed by former United striker Diego Forlan from 2015 to 2016.

The young attacker who is widely regarded as a seriously talented prospect has featured in 37 matches in all competitions for CA Penarol and has so far been directly involved in six goals.

According to a recent report from leading journalist Fabrizio Romano, CA Penarol’s youngster could be set to make a dream switch to Old Trafford.

Romano reports that the Reds are ‘on the verge’ of completing a deal which would see the 18-year-old team-up with the Reds ahead of next season in a move understood to cost around £9m.

Uruguay connection for Man Utd. Edinson Cavani deal is going to be completed on next hours after last details ready to be sorted about agents. 🔴🇺🇾#MUFC are also on the verge to sign Facundo Pellistri [2001, Penarol, special talent]. Fee around €10m, as per @SebasGiovanelli.

United will be hoping a deal can be struck with Pellistri set to become one of two possible Uruguayans to join United this summer after it recently emerged former Paris-Saint Germain marksman Edinson Cavani was soon to become a United player.

With just over 24 hours left in this summer’s transfer window it really could be an exciting time for United fans.