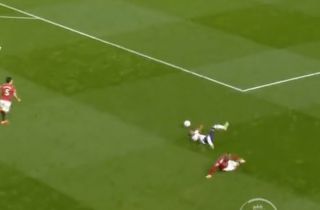 Gary Neville did a brilliant job on commentary this evening even though he had to sit through 90 minutes of rubbish.

Manchester United were beaten 6-1 at Old Trafford after going a goal up inside the first minute and a half.

But it quickly turned into a disaster with United unable to respond.

Tottenham have been better in every department and Neville stressed throughout the match that he believes Ole Gunnar Solskjaer doesn’t have the squad to win league titles. He’s not wrong and few are going to publicly agree without being laughed at.

Neville also focused in on Luke Shaw after the left-back made zero attempt win the ball with a reckless tackle.

Shaw deserved to go but was given a yellow card.

He was lucky and Neville said there is no way to defend it.

Footage below courtesy of Sky Sports — listen out as Neville reacts to Shaw’s tackle: