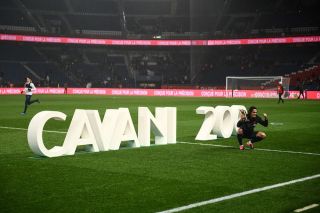 Cavani, 33, is currently a free agent after spending seven years in the French capital and it appears United have won the race for his signature.

The Uruguayan forward has enjoyed a terrific career with Paris Saint-Germain scoring a mighty impressive 200 goals and becoming the French club’s all-time top scorer, but now the question is whether he is the right man for Manchester United?

Having been one of the finest goal scorers in European football for close to a decade now, Cavani is no stranger to finding the back of the net. His superb finishing combined with his terrific work rate and link-up play up top makes Cavani a real special talent and is one who, even now at 33-years-old, can still deliver at the highest level.

With Ighalo failing to hit the ground running since the new season began it has left Solskjaer short of attacking options up front should Rashford get injured and in Cavani he has a true experienced world-class finisher. Cavani he ticks all the right boxes and having him around the club should benefit Marcus Rashford, Anthony Martial and Mason Greenwood.

Whilst the Uruguayan’s best days may be admittedly be behind him he still remains a world-class goal scorer.

Cavani wont be expected to start every week nor will he be expected to make blistering runs in behind opposition back four but he will be there to put the ball in the back of the net when it matters most. If a chance fell to Cavani in the box you would put your money on him to score.

Cavani is a terrific signing for United and is one which the club have needed for some time now. Solskjaer has needed a true world class experienced goal scorer since arriving at Old Trafford and in Cavani he has just that and his signing alone could go along way to making United genuine contenders for the Premier League title this season.