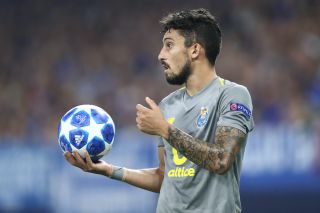 Porto have reportedly offered left-back Alex Telles to Pep Guardiola’s Manchester City as the proposed deal for the Brazilian to join Manchester United continues to stall.

Telles, 27, emerged as a shock summer transfer target for Ole Gunnar Solskjaer after Portuguese outlet A Bola reported earlier this summer that the Reds were expected to make an approach for the highly-rated full-back.

The Brazilian full-back has become one of Europe’s most highly-rated full-backs after a series of direct goal involvements has seen him become one of football’s most offensively capable defenders.

Telles has featured in 195 matches in all competitions for Porto since joining for £5.85m back in 2016 from Turkish side Galatasaray (TransferMarkt) and has since gone onto contribute to a hugely impressive 83 goals.

Despite United’s apparent interest in the bringing the talented full-back to Old Trafford this summer so far a deal has failed to materialise after reports from Fabrizio Romano suggested that the Reds are reluctant to pay Porto’s full £18m asking price when Telles is out of contract next summer.

However, with just over 24 hours left in the transfer window the latest in this ongoing saga again comes from A Bola who are reporting that in a last ditch attempt to get the money they want for their full-back, Porto have offered Telles’ services to arch-rivals Man City.