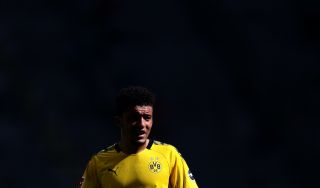 Big news coming out of Germany this afternoon. Jadon Sancho is not in Borussia Dortmund’s match day squad to face SC Freiburg.

The line coming from Jan Aage Fjortoft, a former Premier League player with an inside track on Bundesliga, is that Jadon Sancho misses today’s game due to illness.

Fjortoft tweeted: “Just in! Sancho and Bürki not in the mnatch day squad due to illness.”

Both Borussia Dortmund players missed their last outing against Bayern Munich, which ended in a 3-2 win for the Bundesliga champions.

With Manchester United closely linked with a move for Sancho and time running out to conduct a deal, fans couldn’t help but get excited yesterday when reports claimed the England international missed training, as per Sky Sports.

However, Stretty News spoke to Borussia Dortmund director Sascha Fligge about the reports and he continued to stress that Sancho won’t be leaving the club during this transfer window.

Something isn’t right. Of course, Sancho may well be ill at the moment but Dortmund played down any hope we might have that a deal could still happen.

Do you think there’s more to this?

Reputable journalist Sam Pilger believes United are still working on a deal for their No.1 summer target.

Jadon Sancho to #MUFC: Personal terms agreed, agent fees agreed. Now all comes down to whether United can make an offer that satisfies Dortmund in the next 48 hours. They are trying.

Rapha returns to the lineup 🇵🇹
Jude and Axel combine in the midfield 💪
Morey is back in the squad from injury 🇪🇸 pic.twitter.com/8TFw97P6jB