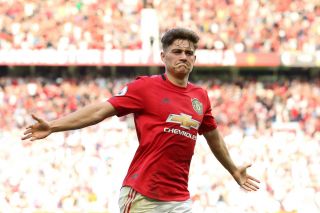 Leeds United’s majority owner Andrea Radrizzani has ruled out a summer move for Manchester United winger Daniel James but did admit that the Welshman remains at the top of his club’s wish-list.

James, 22, joined United last summer from Championship side Swansea in a move which cost the Reds £16m as per TransferMarkt.

The pacy Welshman’s future was not always destined to be at Old Trafford after a famous January 2019 deadline day move to rivals Leeds United collapsed at the last minute which was well-documented in Amazon’s Take Us Home: Leeds United documentary.

James went onto team-up with Ole Gunnar Solskjaer just six-months later and despite a Premier League debut goal against Chelsea the Welshman has endured a tricky first season.

The United wide-man has featured a total of 48 times for the Reds and has been directly involved in a decent 11 goals, however, a mid-season lull in form has seen the 22-year-old come under increasing criticism suggesting he may not be up to the required standard to succeed at United.

A combination of criticism and United’s relentless links to number-one summer target Jadon Sancho sparked speculation that the winger could be subject to a second attempt from Leeds United to secure his services.

However, Stretty News understands that despite the Welsh attacker being a top target for Leeds United, Marcelo Bielsa’s newly-promoted Whites have ruled themselves out of signing James this summer.

After speaking extensively with Leeds United’s majority owner Andrea Radrizzani, when asked if his club will make a late summer swoop for the United winger, he said: “Dan [James] is on top of our list but seems he will be staying at Man Utd.

Read more: Romelu Lukaku hits back at critics who called him lazy at Manchester United