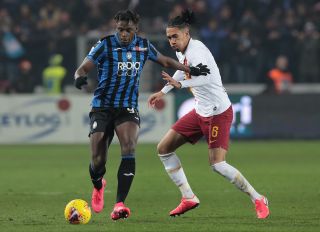 AS Roma are reportedly becoming increasingly frustrated by the lack of progress made in talks with Manchester United over the sale of Chris Smalling.

Smalling, 30, signed for the Red Devils 10-years ago from Fulham and went on to win five major trophies, including two Premier League titles.

Now after spending a season-long loan at AS Roma it would have pleased all parties had a permanent switch been agreed this summer. But it hasn’t.

The latest in this ongoing saga comes from Italian journalist John Solano who claims there is a sense of ‘frustration’ among the Roma hierarchy, who are describing the saga was ‘embarrassing’.

Frustration has nearly peaked within #Roma regarding Smalling talks, with one club source describing the entire ordeal with a single word: “embarrassing”.

Abundantly clear that all parties involved have mismanaged the situation.

I would like to see the deal go through before the deadline because it’s clearly where Smalling wants to be. The centre-back has had no involvement in matches to date and I doubt he’s been training with United’s first team.

Keeping a player against their wish is never a good idea and I don’t believe this to be the case with Smalling. Either Roma never had the money for Smalling or United decided last minute to up their asking price because they’ve left it too late to sign a centre-back.

Roll on Tuesday so we can be done with all of this transfer news!