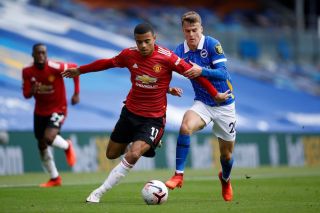 Greenwood and Man City’s Phil Foden were axed from Southgate’s squad on Thursday after being sent home from Iceland last month. The pair breached coronavirus protocols but it was the United forward who faced the biggest backlash from the media which rightly infuriated former club captain turned Sky Sports pundit Gary Neville.

“Mason is one of the top strikers of the future for England and for sure he is going to play many games for England,” Solskjaer told reporters on Friday, as per Manchester Evening News.

“This now obviously has been a learning curve for him.

“Mason has to reflect on where he’s at and what he needs to do, how to get to where he wants to get to.”

Greenwood celebrated his 18th birthday on Thursday but the news that he wouldn’t be in the England squad surely came as an expected blow.

Himself and Foden and both young lads and at that age we were all prone to a mistake.

Greenwood must realise that he has the world at his feet and his career is always on the line.

He’s at the right club to get the support he needs and I think Solskjaer has made that very clear while supporting Southgate’s decision.

It also means Greenwood will get to spend more time at Carrington working on his fitness. I’d rather that than see him picking up an injury on international duty which is always a possibility.