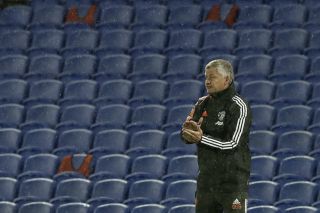 We are days away from the transfer deadline and Ole Gunnar Solskjaer’s update is not a very promising one.

Manchester United have made just signing in the transfer window, with Donny van de Beek arriving from Ajax, but most fans will argue that a lot more is needed in order to see the Red Devils improve this season.

Last season Solskjaer got United back into the Champions League — yesterday we were drawn in the same group as PSG, RB Leipzig and Istanbul — and you’d think the board would have given the manager a chance to go a step closer to challenge for the Premier League title this term.

But no, United are leaving it late in the window again.

Is this really how Solskjaer should be preparing for a new season with United back in Europe’s biggest competition? How can people at the club be okay with this?

“When we’re planning, you’ve got players here we believe in, the transfer window is still open for a little while and the club has been working and know my view and we’re here to strengthen in the long term as well,” Solskjaer told the press this morning (via Manchester Evening News). “Not gonna say what’s acceptable for other teams in this difficult period. We’ll tell you.”

Gary Neville was quick to focus on Solskjaer’s stating that the club knows his view on what the team needs.

Stretty News understands that while Jadon Sancho is still United’s No.1 transfer target, the player’s representatives are equally uncertain about a deal being agreed between now and deadline day.

“I think my wording in lockdown ‘exploit’ was a bad word by me, I didn’t mean in that respect, I meant clubs out there have to move because of the situation and it might be a situation for us, at the moment we’ve not had the, what’s the word, there’s not been those situations.

“We’ve lost loads of money as the other clubs have as well. And when I talk about the squad depth, of course the performances didn’t warrant me giving more of them options, the 11 12 13 players deserved to play they played really well, fitness sharpness you need to. I think it’s a different scenario now, seen many other of the other players who didn’t play too well the other season play really well.”

Solskjaer deserves the chance to make something of his squad and by sitting idle the board are not backing the manager. It’s not acceptable for a club like Manchester United to spend all summer chasing their manager’s No.1 target in such a lacklustre manner.

The club should have looked at alternatives a long time ago but they’ve been dragged through the mud by the media and rightly so.

The day-to-day running of one of the most storied football clubs on the planet is largely overseen by three men who met at Bristol University. That needs to change #mufc https://t.co/TPC9hR9RTN