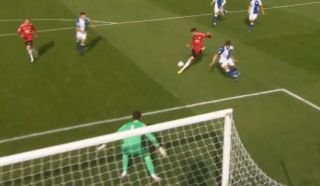 It’s half-time at Blackburn as Manchester United’s Under 23s look for their first points of the season.

With two defeats from two in the Premier League 2 Division One so far and a very young squad competing in a higher division, the Red Devils had their backs against the wall going into this game. A 2-0 defeat away to Leicester followed by a 5-3 beating at home to Liverpool…

The reason for United’s U23s struggling could fall on the club’s decision to prioritise loaning out their most promising players at youth level this season. These young boys were bound to find life difficult against older sides — even playing at U23 level. Hopefully they will come away from it having learned loads and grown as players.

Joe Hugill scored a brilliant goal early on which was cancelled out after a controversial penalty.

It was the dream start for United when Anthony Elenga was allowed to nod a ball into Hugill’s path before the centre-forward struck precisely inside the box. He didn’t take his time either and made sure the ball trickled into the back of the net.

Watch the goal below — footage courtesy of MUTV: