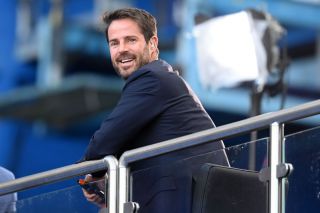 The transfer deadline is set for 11pm on Monday night, 5 October.

The Sky Sports pundit says he is convinced United will land their No1 transfer target Sancho by the end of deadline day, but that’s pushing it and makes no sense that United didn’t try harder to get a deal agreed between the clubs by now.

“It hasn’t gone through yet but I think it will,” Rednapp told Pitch to Post podcast, as quoted by Sky Sports.

“You see certain transfers and it is ebbing that way. There’s a lot of to-ing and fro-ing, and when Manchester United call, or any big club, there’s always a premium on players.

“Dortmund want to get as much as they can for someone like Jadon Sancho. I get that. But I think he’ll be a Manchester United by the end of the window.”

I’m not under the impress United will pay what Borussia Dortmund want for their most prized asset.

The Bundesliga club will need to lower their demands if Sancho is to join United in time, or he could stay in Dortmund for another year before getting his eagerly awaited transfer back to the Premier League.

Redknapp added: “I personally think if they didn’t sign Sancho in this window it wouldn’t be the end of the world but if you can get him, of course you want quality around you.

“The beauty of Liverpool is the simplicity of every week, when everything right, you know what the front three is going to be: Said Mane, Roberto Firmino, Mohamed Salah. It’s easy for the manager to a certain extent.

“But at United, if you don’t bring another player in because you’ve got Mason Greenwood, Anthony Martial, and Marcus Rashford… Solskjaer obviously wants to bring in a player to maybe add some competition.

“If he felt he had the front three and didn’t need Sancho he wouldn’t even be looking for him. But he’s a game changer.

“If you don’t sign him now who knows, he might end up going to Barcelona and you end up kicking yourself. I’m sure everyone would want him.

“There are times when you’ve got to pay up and go and buy a player, a big player. I know it’s a lot of money but it’s only in relation to when they signed Wayne Rooney, who was the best young player in the country, maybe one of the best in the world at the time. You had to pay top dollar for him and when you want to buy the best young players the premium is so high.

“But if you feel he’s going to make the difference for you, you’ve got to go and get him. It’s as simple as that. If that means upsetting a Martial or someone like that, well unlucky.

“Competition, at times, is what you need.”

Redknapp also thinks United need to bolster their defence, saying: “I understand there are problems at the back but they’ve thrown so much money at the problem. You can’t keep buying players. Yeah OK, you want a bit of pace at the back. They tried to buy pace with players like Bailly, who hasn’t really worked out.

“You’ve got Maguire who has been a good signing but you always feel he needs a little bit of pace alongside him, just in those sharp moments when there’s fast feet and he sometimes struggles with that. But it’s easier said than done.

“Everyone is searching for players. Look at Chelsea – I’m sure they’d love to go and get a young centre-back, the one for the future, the next Nemanja Vidic or Rio Ferdinand, but they’re really hard to find.”

Manchester United have let this transfer window drag on and have signed just one player, with Donny van de Beek arriving from Ajax.

That’s nowhere near enough if United play to challenge in any way this season.

It must seem like a slap in the face for Solskjaer after getting the team back into the Champions League.