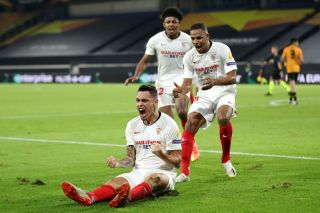 Ocampos, 26, joined Sevilla from Marseille just last summer in a move worth £13.50m as per TransferMarkt and has since gone onto impress on the European stage.

The Argentinian attacker was one of his side’s stand-out performers last season in a campaign which saw the La Liga lift a record breaking sixth Europa League title.

Since his arrival in Spain just over 12-months ago Ocampos has gone onto feature in 47 matches and be directly involved in an impressive 23 goals in all competitions for Sevilla.

With just under four days left in this summer’s transfer window Ocampos has emerged as a shock alternative for Premier League giants United who are desperatly trying to target suitable alternatives to number-one target Jadon Sancho.

According to a recent report from ESPN the South American forward is being considered as a back-up option by the United hierarchy.

ESPN’s report claims that Sevilla are open to allowing their leading forward to depart the club this summer but will demand around £36m for his services.

It is believed that United’s recruitment team have been keeping tabs on Ocampos and after ‘extensive checks’ it has been decided that the striker ticks all the boxes, including his attitude and style of play.

Ocampos’ current situation with Sevilla is thought to be encouraging and an element which could prompt United to make a very late move.