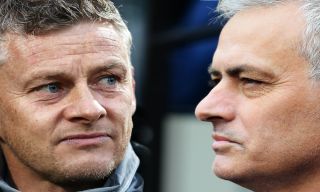 Off the back of a decent 3-0 Carabao Cup win against Brighton and Hove Albion  during the week, here is how we expect manager Ole Gunnar Solskjaer to line his young Reds up on the weekend.

Despite two impressive performances since rivalling De Gea for the right to wear the number-one jersey, I expect Solskjaer to bench Dean Henderson and restore the Spaniard back to the Reds’ starting line-up.

No brainer really. With virtually no other options available at right-back, Wan-Bissaka will start again on Sunday and be instructed to help keep star-striker Harry Kane quiet.

After a hugely impressive performance against Brighton in the Carabao Cup during the week, I think Sunday’s game could see Solskjaer make the long-overdue centre-back mix-up which will see the flamboyant Ivorian partner Harry Maguire at the back.

Was always likely to get the nod ahead of back-up option Brandon Williams but after a seriously underwhelming performance in the Carabao Cup during the week, Shaw’s place is now under no threat what so ever.

Easily United’s best defensive midfielder and in a game which will decided in the middle of the park, I expect Solskjaer to restore the resolute and experienced Serbian to the starting line-up in an attempt to keep Lo Celso and co. under control.

Scored a free-kick during the week after coming on during the second-half and continues to look happy wearing Red.

I think Pogba’s inclusion will demote new-signing Donny van de Beek to the bench but I think overall, fans must understand that a Premier League tie against an in-form Spurs is not the game to play a midfield double pivot of Pogba and van de Beek.

Mr undroppable. There is no way, assuming no last minute injury, that our Portuguese Magnifico doesn’t start against Spurs on Sunday.

It would be a shame for Juan Mata who was arguably United’s best player during the week to miss out on a second start of the week, but I do expect Solskjaer to restore star-boy Greenwood to the starting line-up.

Having been dropped from the England squad by international manager Gareth Southgate, I expect domestic manager Solskjaer to award more valuable game-time to his teenage sensation with no added risk of the youngster experiencing tiredness over the break.

Man United’s answer to Harry Kane – Easily the side’s best left-sided attacker. The 22-year-old will start against Spurs ahead of the likes of Daniel James on Sunday.

A one legged Martial offers more than a two-legged Odion Ighalo so despite the continued inspired form of Fernandes, Martial is still the first name on the team-sheet.