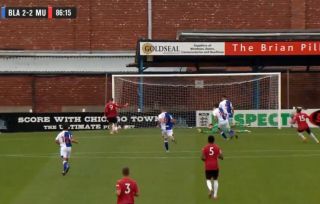 Manchester United U23s collected their first point of the Premier League 2 Division 1 season as they drew away to Blackburn on Friday afternoon.

Neil Wood’s side went into the game after losing their first two fixtures of the season, away to Leicester City and at home to Liverpool, but were unable to take all three points and relied on a late equaliser from Joe Hugill.

This is United’s U23s’ first year back in the top tier of reserve football having gained promotion last term. However, a lot of United’s best young players have been sent out on loan so the Wood’s squad is very young.

Young striker Hugill will claim all the headlines as far as United are concerned for scoring a brace in the 2-2 draw. The second — like his first — was assisted by Anthony Elanga.

Watch the goal below — footage courtesy of MUTV: