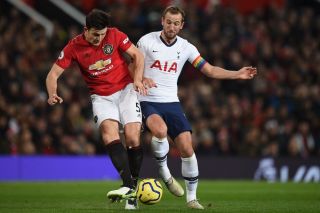 That’s a very brave statement considering the abysmal defending we’ve seen at times since the 2020-21 campaign began. Teams are finding it too easy to attack against us, which was seen again last week as we beat Brighton 3-2. The Seagulls hit the woodwork an incredible five times during that match.

Kane is also arguably the best striker in the Premier League. If anything we will have have our fingers crossed hoping he has an off day — like he tends to against United.

But Solskjaer is convinced that Maguire, who returns from a knock that left him out of United’s midweek 3-0 win in the Carabao Cup over Brighton, is ready for Kane as the Red Devils attempt to keep Tottenham’s main man quiet.

“I think every coach when you play against a team with the quality they have but with Harry Kane you prepare really well,” Solskjaer said during his press conference. “Harry’s one of the top strikers in the world and you’re just happy he’s back fit after the injury he had last year. We’ll do our best to keep him quiet, ewe have a Harry back there as well who is looking forward to playing against his international mate.”

"We'll do our best to keep him quiet. We've got a Harry back there as well who is looking forward to playing against his international mate." 🎤 #mufc #mulive pic.twitter.com/aCXGpuw4Ag

Speaking about facing Tottenham, Solskjaer said (via Manchester Evening News): “Well a result will always be a consequence of the performance you put in, the more we improve our performance the bigger chance to win, players are getting fitter, sharper, stronger, even though we’re a few games behind in that respect we hope to see improvement and need to, especially from the league games.”

United are playing in search of their fourth win on the bounce. That’s how we need to be reacting to an opening day defeat against bloody Crystal Palace!