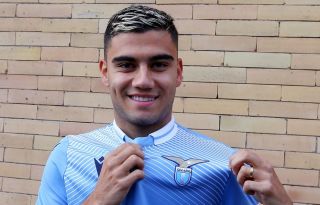 Andreas Pereira underwent his medical at Lazio ahead of a season-long loan move from Manchester United.

The Brazilian has fallen down the pecking order at Old Trafford and with the arrivals of Bruno Fernandes and Donny van de Beek it was always possible for Pereira to be moved on.

With a bit of hope he will perform well in Serie A and Lazio will want to make the deal a permanent one. Pereira has ability but is nowhere good enough to be playing for United.

That said, he has made 75 appearances for United, scoring four goals and assisting a further five.

Lazio are getting a player on loan has been in and out of United’s first team, so it will be interesting to see how he performs if giving a long run in Simone Inzaghi’s side.

After previous loan spells at Granada and Valencia, Pereira is trying something new like Chris Smalling did by switching the Premier League for Serie A.

Check out the photos below as Pereira wears his new Lazio shirt for the first time.

Lazio also shared pictures of the midfielder during his medical examination.

We would like to wish Pereira all the best during his time in Italy with Lazio.