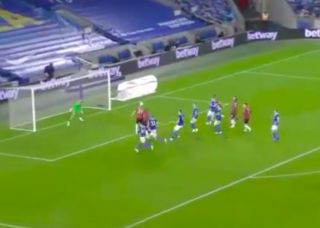 Manchester United have got the crucial breakthrough just before half-time in their Carabao Cup round of 16 clash against Brighton at the Amex stadium.

In an even first-half, Odion Ighalo had a great chance to open the scoring but found the side-netting after rounding goalkeeper Jason Steele.

Brighton were eventually undone by a set-piece in the 44th minute as Juan Mata provided a moment of real quality.

The Spaniard curled in a glorious cross which was met by Scott McTominay who rose highest to give the Reds the lead.

United are now on course for the Carabao Cup quarter-finals and have serious firepower in Marcus Rashford, Mason Greenwood and Paul Pogba to seal the tie in the second-half.

Scott McTominay heads home and the visitors lead at the Amex