Manchester United’s second trip to the south coast in four days will be an audition for some players to work their way into Ole Gunnar Solskjaer’s first-team plans.

Even the most ardent of United supporters will admit the Reds were fortunate to defeat Brighton 3-2 at the Amex on Saturday after the home side hit the post on five different occasions.

Wednesday’s Carabao Cup tie will hold slightly less importance but victory is still paramount as the Reds look to gain some early season momentum after the humiliating opening day defeat to Crystal Palace.

Solskjaer is likely to name a similar side that overcame Luton Town in the previous round just a week earlier with one eye on Sunday’s huge Premier League clash against Jose Mourinho’s Tottenham Hotspur.

Dean Henderson made a stunning save on his debut and will return as the ‘cup goalkeeper’ as he continues to fight for David De Gea’s first-team spot.

It was a shame supporters didn’t get to see Teden Mengi start in the 3-0 victory over Luton; the 18-year-old was an unused substitute against the Championship outfit.

It is therefore unlikely that the academy graduate will be selected against higher calibre opposition in Brighton so we expect Eric Bailly and Harry Maguire to reunite in central defence.

Bailly should have started on Saturday after a dominant display against Luton and another shaky performance from Victor Lindelof means the Ivorian should use Wednesday’s platform as an audition for the Spurs game at the weekend.

Van de Beek could assume the attacking midfield role where he looked bright in his first start against Luton, giving a rest to the indispensable Bruno Fernandes.

Fred and Scott McTominay may make up the midfield three with a familiar double pivot, allowing Nemanja Matic time for full recovery ahead of the weekend.

Juan Mata became the only United player to score in every post- Sir Alex Ferguson season against Luton and is likely to retain his place.

Jessie Lingard showed promising signs in the last round and Solskjaer has another opportunity to offer the 27-year-old minutes.

Odion Ighalo is likely to lead the line in place of Anthony Martial despite a poor showing against Luton. 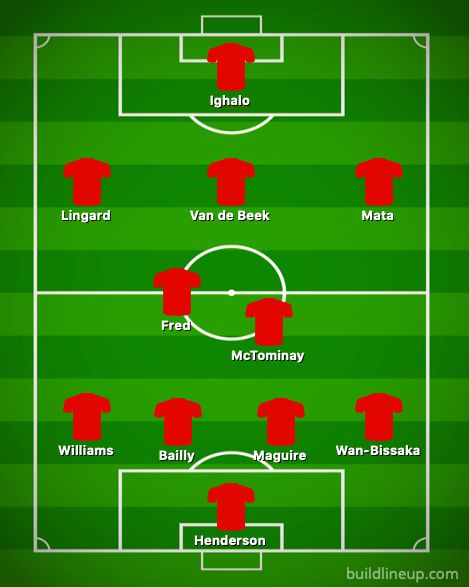