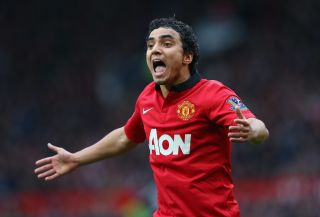 Ex-Manchester United defender Rafael has not held back in a recent attack on former Reds’ manager Louis van Gaal. The Brazilian defender has slammed his old boss claiming that the Dutch tactician is ‘one of the worst people’ and has suggested that his time under under van Gaal was ‘sh*t’.

Rafael, 30, joined United’s under-18s in 2008 from Fluminense’s youth academy and went onto spend seven successful years with the Red Devils.

The flamboyant full-back soon became an Old Trafford fan-favourite as he went onto make 170 appearances in all competitions for United during a period which saw the South American lift five major trophies including three Premier League titles.

Rafael’s time with United came to an end in 2015 when David Moyes’ managerial successor van Gaal took the Old Trafford hot seat in a change-over which paved the way for the full-back to join Ligue 1 side, Lyon.

Speaking exclusively to The Athletic the 30-year-old ex-Red has launched a scathing attack on his former manager, as quoted by Daily Mail, Rafael said: “I talk bad about some people, like van Gaal. I don’t like van Gaal.

“When they said van Gaal was the manager, a lot of friends called me. I could not believe it, as a lot of people told me he does not like Brazilians (because of their style of play). They told me ‘the first thing he is going to do is take you out.”

“Actually, it was the second thing because on the first day, he did not speak to me. On the second day, he said ‘You can leave.’ I had not even trained and he said that. I could not believe it. I said: ‘OK.’

“I still tried to battle for my place. I stayed one year with him. It was so, so hard. He is one of the worst people I have worked with.”

Rafael went onto reveal how his former manager would interrupt the team’s meal times which the Brazilian believes contributed to a bad team culture, he said: “Every day, after breakfast, after lunch, or if we had dinner together, he would speak to everyone for 15 minutes about training, about what has happened, about everything, about life.

“You know when you start to stop listening to what someone is saying, because they speak so much? He wanted to show he could speak. But it was every day! All the time!

“You need to wait for everybody to finish their food to leave, which is fine, OK. But then we watched him talk, for 15 minutes, with all due respect, about s***. That is the truth, man. It was s***.

“He didn’t care how people are, he just wanted to think about himself — ‘I am like this, you respect me, you do like I want.’ That’s how he speaks.

“Players get tired of this. You don’t need to speak all the time. If we talk (about culture), he changed everything.”