Bruno Fernandes only became a Premier League player in January and he already convinced it is the best league in the world.

Semedo has agreed a deal to keep him at Molineux until June 2023, with an option to extend it to the summer of 2025.

Ever since Matt Doherty’s transfer to Tottenham Hotspur, Wolves manager Nuno Espirito Santo has been on the lookout for a right-back and now he has his man.

The 26-year-old made 124 appearances for Barcelona and has 13 caps for Portugal, so he comes to the Premier League as a known talent.

Semedo sounds excited about his transfer to Molineux. Wolves are a Premier League side renowned for playing attractive football and they have been knocking on the top six’s door.

An hour later, Bruno Fernandes replied: “Welcome to the best league in the world brother. 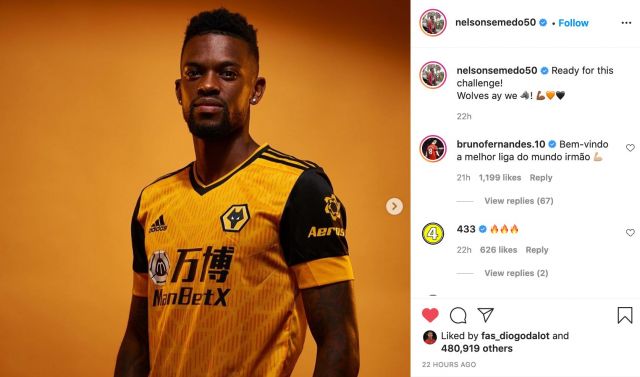 Wolves are clearly delighted with their new signing, with executive chairman Jeff Shi telling the Wolves website: “It isn’t often that we have the opportunity to sign a world-class player from a world-class club.”

Semedo is Wolves’ third signing this summer, following the arrivals of Ki-Jana Hoever from Liverpool and Fabio Silva from FC Porto.

The Portuguese defender told the Wolves website why he chose to move to the Premier League.

“Last year they [Wolves] did a very good season and it’s a very important team in England, in Europe also,” Semedo said.

Portuguese players have done well in the Premier League, especially at Wolves in recent years, but none of them are on the same level as Fernandes at the moment.