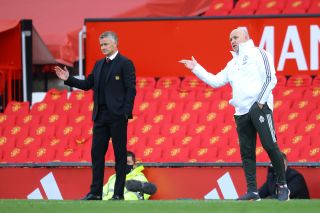 Manchester United need to bounce back from their opening weekend defeat to Crystal Palace when they continue their 2020-21 Premier League campaign on Saturday afternoon.

Ole Gunnar Solskjaer’s side lost 3-1 at Old Trafford in their season opener and now face a trip to the Amex Stadium to take on Brighton.

The Red Devils go into the game on the back of a 3-0 League Cup victory over Luton Town on Tuesday night. Solskjaer gave minutes to a number of fringe players, but it’s likely to take a couple of weeks before all of our players are up to speed with match fitness.

Brighton were not a problem for MUFC last season, winning 3-1 and 3-0, but after last weekend’s performance against Palace it’s difficult to have confidence in beating anyone!

Ahead of the match, Brighton manager Graham Potter has said (via Brighton’s official website): “It’s a big week for us with those two matches and then Everton before the international break. That’s what we wanted because we wanted to go through in this competition. Players always want to play and the best thing for them is to be out on the field on nights like tonight to keep everyone in the group ready for when they’re needed. You saw that today. There was a willingness to run and fight for the team and get the result and that’s why I’m very happy.”

Brighton have beaten Newcastle already this season, but fell to defeat in their season opener against Chelsea, so they’ll be out this weekend looking to cause an upset.

How to watch Brighton vs Manchester United steam & start time

We are hoping to see the players fitter this weekend. A two-week pre-season with only one friendly game and lack of new faces in the team has seen tensions rise within the fanbase.

Solskjaer cannot afford to sit back and sulk about the current state and needs his side require. A big performance is needed at the Amex Stadium.

Manchester United are still miles from their best and this Brighton side probably have more confidence at the moment. I’ll go for a 2-0 win, as United should improve from last week.