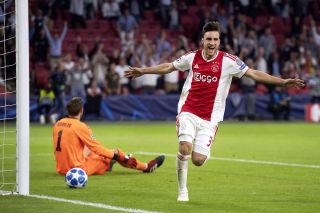 Telles, 27, has been hotly linked with a move to Old Trafford after it emerged from A Bola that United were eyeing a late summer swoop for the attacking full-back.

However, with a move seemingly no closer now than it was when it was first reported, journalist Tim Vickery has claimed that the Reds’ attentions are turning to Ajax left-back Tagliafico as per reports from AS Argentina.

United could very well draw upon their good relationship with Ajax CEO Edwin Van der Sar to help push a potential deal for Tagliafico over the line.

🗣”Porto are driving a hard bargain for Telles and the focus could be shifting to Tagliafico!” @Tim_Vickery on Manchester United being linked to Alex Telles & Nicolás Tagliafico pic.twitter.com/3mbEQjgvol