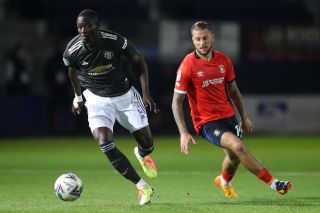 Manchester United fans were reminded of the exceptional qualities of Eric Bailly as Ole Gunnar Solskjaer’s side progressed through to the next round of the EFL Cup with victory over Luton Town.

Bailly delivered an assured performance at the back as the Reds kept a clean sheet against the gritty Championship opposition at Kenilworth Road.

But Bailly has the speed to complement captain Maguire and was untroubled, albeit against inferior opposition to what United will come up against in the Premier League.

Lindelof’s error-strewn performance in the humiliating opening day defeat to Crystal Palace has led to many calls for the Swedish international to be dropped against Brighton on Saturday.

Bailly’s injury record is concerning, but while fit, it wouldn’t be a gamble for Solskjaer to keep him in the team ahead of Lindelof for the Brighton game.

A partnership between the Ivorian international and Maguire could prove to be more effective in the long-term for the Reds.

See Bailly’s highlights from the victory over Luton, courtesy of Manchester United: