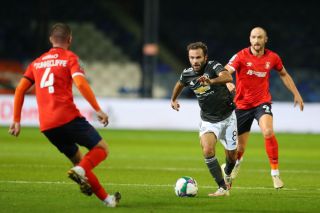 Manchester United and Luton Town are currently embroiled in a Carabao Cup Third Round tie which see the Premier League side head into the break 1-0 up.

United took the lead moments before the end of the first-half after left-back Brandon Williams went down under a poor challenge which resulted in a penalty being awarded.

Ole Gunnar Solskjaer can consider himself fairly lucky to be going into the break 1-0 up after yet another underwhelming performance.

The Reds who lined-up with 10 changes from the side who started against Crystal Palace in the league last Saturday have not done much to lift fans hopes they can mount a serious silverware challenge this season.

Despite their best efforts the Reds have mostly failed to break Luton Town’s rigid back-line with the best chance of the half coming after a Donny van de Beek dummy set Mata up.

In light of the disappointing first-half, United fans have taken to their social media to express their discontent at their side’s performance in a game they really should be cruising.

What can you expect from that line up, not much and Ighalo is a waste of money and space.

Honestly, boring. Really bad. Relying on penalties yet again. We need exciting attacking football. Many fans said that when LVG and Mourinho were here. Can’t be different now! I am bored

Williams and Ighalo are league one level at best

We are so awful

Lingard should leave. I’m glad Ighalo is only on loan until Christmas. De Beek is so good at positioning that the rest of the team can’t keep up. The team is slow and not good enough.

I just wish I had a fast forward button to speed things up. We do everyone so bloody slowly. It’s rubbish.

Lingard is the only positive so far. VDB is class btw.