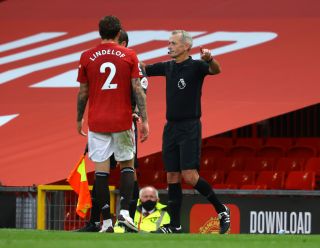 Ally McCoist has lambasted handball rules in an extraordinary rant in the wake of Manchester United’s horrendous opening day defeat to Crystal Palace at Old Trafford.

United fell 2-0 behind in the second-half when VAR deemed Victor Lindelof to have handled Jordan Ayew’s shot from close range in the penalty area.

Ayew’s subsequent penalty was saved by David De Gea but United’s misery was compounded when the Spaniard was adjudged to have been slightly off his line and ex-Red Wilfried Zaha fired in the retaken spot-kick.

Mike Dean’s decision to overturn his decision after witnessing several slow-motion replays on the pitch side monitor has been a key talking point from this weekend’s Premier League games.

It is remarkable that Lindelof’s arm was identified as an in unnatural position when tracking back, with Ayew in such close proximity when he struck the ball against the Swedish international.

This is alluded to by ex-Rangers manager and Talksport pundit McCoist who is baffled by the nonsensical decisions now being made as a result of the handball rules change.

Of course, it’s important to reiterate that United fans are no way blaming the lamentable refereeing decision as the main cause of the defeat.

Ole Gunnar Solskjaer’s men were outfought and outthought and were completely humbled in their Premier League opener.

But frustration around the penalty decision is understandable, particularly given the ambiguity around what is now considered a spot-kick with the new handball rules.

Listen to McCoist’s impassioned handball rant below, via TalkSPORT:

😡 “An absolute shambles, it makes an utter mockery of the game.”

😡 “Some of the decisions are frankly embarrassing! Nonsense!”

😡 “Give the ref the responsibility to say if it’s a deliberate handball!”

This rant is epic! 🔥 pic.twitter.com/hYBapsfLA9