Manchester United must bounce back from their humiliating 3-1 opening day league defeat to Crystal Palace with victory away to Luton in the EFL Cup on Tuesday evening.

There was little to be optimistic about at Old Trafford on Saturday and a dominant win over Championship opposition is vital as frustrations grows in the fanbase over transfer inactivity.

In-form Luton will prove a stern test for United with Ole Gunnar Solskjaer’s side’s lethargy on the opening day particularly disconcerting for the fanbase.

The Hatters sit third in the Championship after winning their opening two league games and will play with freedom against the Reds.

Despite Luton’s impressive start, United have more than enough quality to overpower their opponents and Solskjaer can afford to make wholesale changes to his starting eleven.

Dean Henderson is set assume Sergio Romero’s role of ‘cup goalkeeper’ as he aims to compete for the David De Gea’s number one spot and is likely to make his United debut.

Aaron Wan-Bissaka wasn’t ready to start against former club Palace on Saturday but is in line to replace Timothy Fosu-Mensah at right-back.

The double midfield pivot of Paul Pogba and Scott McTominay performed poorly and Nemanja Matic and Fred could return to continue their effective partnership.

Donny van de Beek arguably should have started against Palace and impressed with his goal-scoring cameo from the bench. The Dutchman is adept in an attacking midfield role and could give Bruno Fernandes a rest.

Meanwhile, Odion Ighalo should lead the line for the Reds so Anthony Martial can fully recover for Saturday’s trip to Brighton. 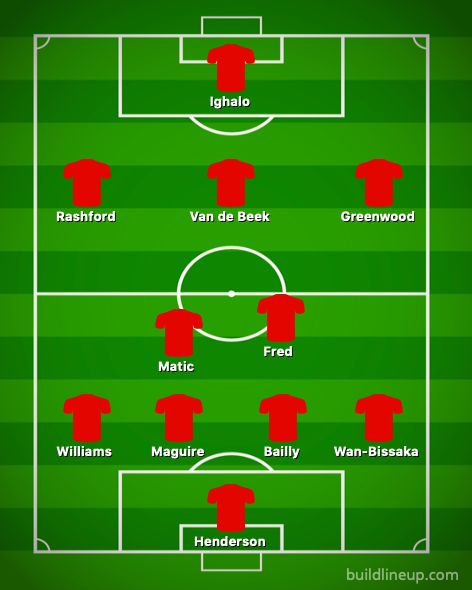