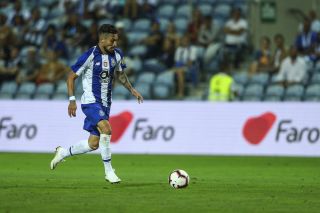 According to leading journalist Fabrizio Romano, Manchester United have been in contact with the agents of FC Porto full-back Alex Telles. The Brazilian will reportedly push to leave the Portuguese champions within the coming days ahead of an expected bid from the Premier League giants.

Aged 27, Telles is in the prime of his footballing career and could be available for a respectable price of just €20m, as per A Bola. A potential deal could take slightly longer than expected as Telles’ former club Galatsaray have a 10% sell on clause in the player’s current FC Porto contract.

Just yesterday, the talented defender scored two penalties and bagged an assist as FC Porto cruised to a 3-1 win over local rivals Braga.

According to WhoScored, the left-back’s strengths are listed as crossing, key passes, set pieces, holding onto the ball and aerial duels. Telles already sounds like the perfect full-back which could compliment symmetrical full-back Aaron Wan-Bissaka whose weaknesses are just those.

WhoScored also list Telles’ style of play as ‘likes to cross’, ‘likes to play short passes’ and ‘not diving into tackles’. Thinking of the potential partnership on the left-flank with Marcus Rashford is leaving most United fans drooling.

United’s current left-back situation consists of Luke Shaw and Brandon Williams, both have shown regular inconsistencies in the past season.

According to Andrew Kilduff of Stretford End Banners, Diogo Dalot could return to FC Porto as part of a deal for Alex Telles. This would make perfect sense for both sides, as it creates a vacancy in backup to Wan-Bissaka. Williams would be the ideal backup, making the switch across the park.

Being right footed this position would suit Williams down to the ground in my opinion and still has a lot of time to develop and grow with Wan-Bissaka as a defensive mentor.

This would leave Shaw as backup to Telles at left-back, who is more than good enough to provide competition week in week out.

Telles has proven himself as a world-class goalscorer from full-back during his time in Portugal, scoring 26 goals and providing 56 assists in 193 appearances. Additionally, he is a proven winner with two Portuguese titles and a Portuguese cup on his impressive portfolio.

Last season, in FC Porto’s league campaign Telles outclassed Shaw and Williams in almost every area. Telles scored 11 and provided eight assists whereas Shaw and Williams combined only managed just the one goal and zero assists.

The Brazilian continued to impress with an average rating of 7.37 in comparison to 6.85 and 6.71 respectively from the United duo.

It is clear to me that Telles is someone who would greatly improve this United side and possibly bring Rashford out of his shell on the left wing.

As always, FC Porto could just be using the monumental name of United to hurry up interest from PSG, as seen being used by Real Madrid with Gareth Bale and Bayern Munich with Thiago for example.

However, according to Stretty News’ Leah Smith, we understand that PSG’s position in any potential deal to lure Telles away from FC Porto is ‘weak’ after a previous €15m bid was rejected earlier this summer.

PSG made a €15m offer for him a few months ago. Rejected.

Player’s preference is to join MUFC!

Fee is expected to be around €25m (as I previously reported earlier in summer) – Porto are considering Wolves’ Vinagre as replacement. pic.twitter.com/7ymnTSVedB

This transfer saga is expected to be wrapped up soon as United look to get a move on with Borussia Dortmund for Jadon Sancho.

Do you think Alex Telles would be an ideal candidate for Solskjaer’s rebuild at Manchester United? Drop a comment!

One response to “Opinion: Should Manchester United bring in FC Porto’s Alex Telles?”