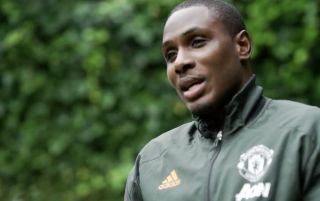 Manchester United back-up striker Odion Ighalo has issued a heartwarming response to his recent loan move which saw him join his boyhood club United back in January.

Ighalo, 31, made a shock switch to Old Trafford from Chinese parent club Shenhua at the start of the year and during a season which saw the ongoing COVID-19 pandemic halt play found himself extending his stay to complete a full calendar year.

Since his arrival the experienced Nigerian has embraced his bit-part role at Old Trafford which has seen become somewhat of a cult-hero among the United faithful.

The forward has done the best he can with the limited game-time he’s been awarded, however, after appearing in a total of 20 matches with most of those coming off the bench, the Nigerian has been directly involved in a decent six goals.

Speaking ahead of United’s EFL Cup Third Round tie against Luton Town on Tuesday, Ighalo who spoke to BBC Sport (as quoted by Manchester Evening News) reminisced on his last nine-months at his beloved United and promises to remain positive with three-months still left before his move expires, he said: ‘My favourite moment is when I scored my first goal for Manchester United.

“That energy, that positivity, that happiness, never change.

“You can see that smile on my face every time I go in there.

“It’s not every man’s dream that comes to pass, well mine did. My kids will grow up and see that I played for a team that I supported from when I was young, I cried when they lose and all of that. I want to keep doing what I need to do until the last day that I play for the club.”