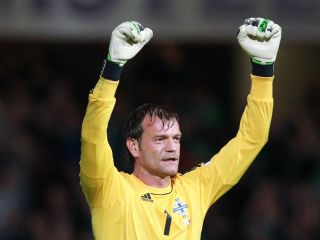 Former Manchester United goalkeeper Roy Carroll, who once fought for his place between the sticks with Tim Howard, is the latest guest on the official UTD Podcast.

And the former Northern Ireland international, 42, has revealed all on his battles to overcome alcoholism and depression.

Carroll made 46 appearances for United between 2001 and 2005, but admits he hit ‘rock bottom’ during his recovery from injury.

Sadly his struggles heavily affected his life off the field but the future seems bright.

He opened up about the experience on the podcast — explaining how his daily routine entered around booze — and the trauma it caused his family.

“It was depression,” Carroll told the official Manchester United podcast. “Let me try and explain it. I was doing same thing every day. I was getting in that little hole, and it was getting bigger and bigger.

“Because I was injured I wasn’t even going into training — they had told me to take two months off. So I was getting into a routine, waking up around 10 o’clock, half ten. Drinking when I got up, drinking at lunchtime, drinking at teatime. The wife and the kids would come in and I was depressed that I couldn’t do anything. It was such a horrible feeling.”

Carroll attended rehab and has made the decision not to drink again, adding: “My wife knew. She knew I was in a bad way. That’s why I went to rehab. Basically my agent and my wife put me into rehab. For me I didn’t even know how bad I was at the time. I said, ‘No, I’m not going. I don’t want to go’. I ended up going for my wife and my agent. I just wanted to say I’ll go for them. Mentally, in my head, I was thinking, ‘I’m not coming off the drink’.

“I was only in rehab for six days, I came back out and I was off the drink for a week and I had the press and everybody waiting outside my house. After a week they were away and I jus went out drinking again.

“It was down to me that I went off the drink because I woke up one day, I was separated, I had moved out of the family home. I was in an apartment in Canary Wharf in London. I woke up one day and looked in the mirror and said, ‘Who the hell am I?’ I didn’t even recognise myself in the mirror. I just had to change myself and I ended up going bak to my wife, begging my wife to take me back. She never took me back straight away but I’ve stayed dry ever since.”

The highlight of Carroll’s international career was being part of the Northern Ireland squad for Euro 2016. However, he recently played for Linfield — winning two league titles in three years.

It’s upsetting to hear and most of us know someone who has been through this. Alcoholism is a disease and it’s important that those who suffer from it get the right support.

You can listen to the rest of the interview, by searching for UTD Podcast on any of your favourite podcast providers. Previous episodes will be available.