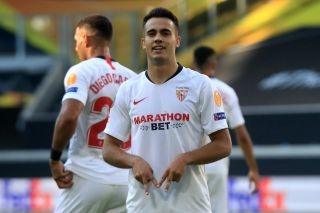 Reguilon, 23, has been strongly with a move to United this summer after he enjoyed an impressive loan spell with last season’s Europa League winners, Sevilla.

The young Spaniard featured a total of 38 times in all competition for Sevilla last season and was directly involved in an impressive eight goals including a goal and an assist in the Europa League.

Reguilon rejoined parent club Real Madrid at the end of last season’s extended campaign and has since seen his future thrown into doubt as United eye a potential £23m move, as per Marca.

According to a recent report also from Spanish outlet Marca both Real Madrid and United are embroiled in intense talks for the Spanish defender with a breakthrough on the cards.

The report claims that United have been one of the most interested parties when it has come to securing Reguilon’s services.

Marca’s report goes onto claim that the final fee paid for Reguilon will depend on the agreement of a buy-back clause being included or not, but with talks suddenly intensifying in the last few hours, United’s second summer signing could soon be unveiled.