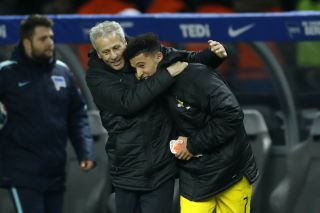 Borussia Dortmund manager Lucien Favre has reaffirmed the German side’s stance that Jadon Sancho will remain a Black and Yellow player next season despite relentless pursuit from Manchester United.

Sancho, 20, has been United’s number-one summer transfer target in what has been one of football’s worst kept secrets.

The young attacker’s hugely impressive breakthrough campaign last time out saw him directly involved in 40 goals in 44 appearances in all competitions for Dortmund.

Sancho’s impressive and consistent top-flight form saw him shoot to the top of United’s summer wish-list as the club seek to reinforce their wide attacking options.

However, despite Ed Woodward’s relentless efforts to land Sancho in a move which would cost upwards of £100m, as per The Times, the proposed deal has yet to materialise.

Despite a report earlier this month from Sky Sports claiming the Reds had made a significant breakthrough in ongoing talks for Sancho, according to a more recent report from the Telegraph, the United hierarchy are now beginning to lose hope that they’ll be able to secure Sancho in time for the 2020-21 season.

The latest in the ongoing Sancho-saga comes directly from Dortmund’s manager Favre who spoke to Swiss news alliance Keystone-SDA as quoted by Metro and said: “We need him [Sancho], no question.

“Everyone was happy that he stayed. We don’t need to talk long about its qualities – they are enormous.

“He scores and sets up a lot of goals and can often make all the difference.

“But there are some details that Sancho needs to improve. That is quite normal for a 20-year-old.”

Favre’s comments come in light of a report from Mundo Deportivo claiming that United could now turn their attentions to Real Madrid’s Gareth Bale who has been made available for a cut-price of £18.5m.