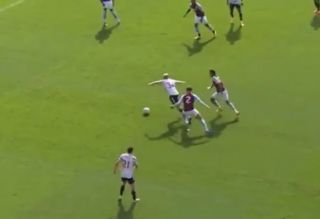 Manchester United’s only pre-season game ahead of the 2020-21 campaign gave Ole Gunnar Solskjaer plenty to think about.

Of course, the Reds lost 1-0 against a side that successfully battled relegation last season, but you could tell our players weren’t quite up to speed with things and some big players were absent.

Donny van de Beek completed the full 90 minutes and Solskjaer told MUTV that the Dutchman was one of the biggest plus from outfield.

“Donny was maybe the biggest plus in the outfield,” Solskjaer said. “He’s such a finder of space and he creates time for himself with his timing and movement. I was very happy with his performance.”

There was one moment in the game I thoroughly enjoyed as Van de Beek broke free from two Villa players with a crafty turn in the other direction.

They were sent to the shops and back! Left utterly embarrassed by the new man at United.

The thoughts of seeing Van de Beek and Bruno Fernandes in the same midfield is mouth-watering. Not to mention Paul Pogba too.