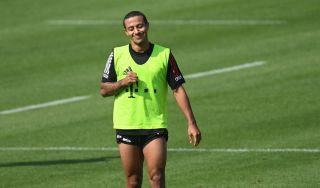 The Premier League pair have reportedly been chasing the Bayern Munich midfielder this summer, with Liverpool portrayed as being most keen in the player.

Bayern are standing firm on their stance — unwilling to sell Thiago unless potential suitors match their £27m transfer valuation.

That’s peanuts for a player considered one of the best midfielders in the world. Thiago would improve any side in the Premier League but I don’t think United have done anything wrong, despite Hoeness’ comments.

Hoeness slammed United and Liverpool while claiming Thiago already has an agreement in place to move to England.

According to a recent report from Sport.de (H/t Sport Witness) who have quoted Hoeness saying he believes Thiago already has one foot in the door at either United or Liverpool: “Thiago had a great offer with us for four years.

“A few days later he said that he was looking for a big challenge. Supposedly he is in agreement with Liverpool and Manchester United.

“The clubs have not yet approached Bayern. It’s not style, they want to blackmail us.

“But even if Thiago leaves, Kimmich, Goretzka and Muller will player. Then we have Tolisso, who was thrown back two years due to injuries.”

Time is running out to strike a deal for Thiago, with just 23 days left until the transfer window shuts.

Manchester United are actively trying to sell players and I wouldn’t expect another arrival until at least one player leaves Old Trafford.